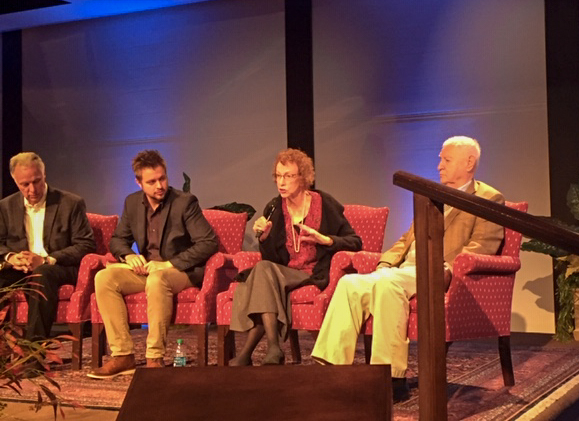 ASHEVILLE, N.C. – In early November, three generations of Blackabys spoke together at Billy Graham’s Training Center at The Cove in Asheville, NC, for the seventh consecutive year.

“The Cove has been one of my favorite places to speak over the years,” said Henry Blackaby, international speaker and bestselling author of Experiencing God. “How humbling it was for me to have people come from all over North America to hear from me, my son, and my grandson.”

The theme for this year’s conference was the life-changing questions God asks in Scripture.

“We often think it’s the questions we ask God that matter,” said Richard Blackaby, Henry Blackaby’s oldest son and the president of Blackaby Ministries International. “But a single question from God has the power to transform a person’s life.”

The response to the Blackabys’ messages was overwhelmingly positive, and many people said they left the event feeling refreshed and emboldened to persevere in the assignments God has given them.

“Great to hear the Blackabys,” one attendee said. “Excellent conference!”

For Mike Blackaby, Henry Blackaby’s oldest grandson, serving God with his father and grandfather makes his time at The Cove extra special.

“It is amazing any time I get to speak alongside Dad and Grandpa because of the legacy they have passed down to me,” Mike Blackaby said. “Sarah and I have three sons, and I can only imagine the joy it would give me to speak alongside them in the future!”

The youngest of the three speakers, Mike Blackaby said he is passionate about reaching the next generation for Christ.

“We are each called to pass on the faith,” he said. “And one of the great things about having three generations speak at a conference together is that it shows how God desires to be in relationship with us throughout all stages of our life.”

He challenged attendees to answer the same question God asked Hagar in Genesis 16:8 – “Where have you come from and where are you going?” He said that people’s lives tell a story, and they need to allow God to be the director of that story, not just the producer.

“God spoke to [my] spirit for ministry thanks to Mike Blackaby,” one attendee commented.

Richard Blackaby preached on passages from Job and Matthew.

“I have been discouraged,” an attendee said. “Richard [Blackaby] challenged me to confess and find Scripture to renew my mind to overcome it.”

Richard Blackaby has ministered at The Cove frequently during the past 12 years, but he said his favorite conferences are the ones he leads with his family.

“Few things are as rewarding or as enjoyable for me as speaking with my father and one of my children,” he said. “What a blessing to be able to minister to such wonderful people with such a special team of speakers!”

He is already scheduled to return to The Cove in 2019.

For more information about upcoming ministry events, subscribe to the BMI monthly newsletter.