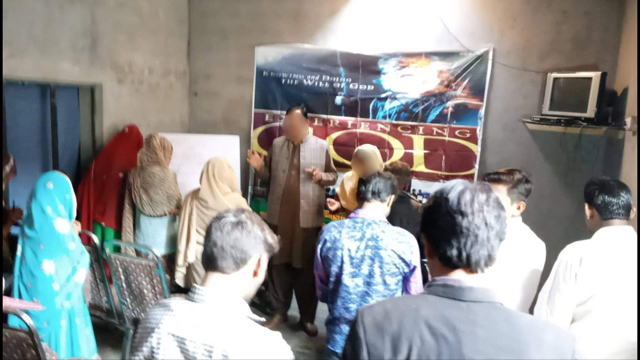 PLYMOUTH, Indiana – On the surface, Plymouth Baptist Church in Plymouth, Indiana (population approximately 10,000), is not an obvious vessel for world missions. Though the congregation once averaged more than 300 attendees at weekly services, the Great Recession hit Plymouth’s economy hard and left the church with roughly 35 people and the 1.5-million-dollar mortgage incurred from previous building expansions.

Times were hard for the remaining members, but rather than boarding up the windows and walking away, executive pastor and retired lawyer Doug Dieterly (who works as an unpaid volunteer) saw their struggles as an opportunity for the church to turn its gaze outward. All the way to South Asia, in fact.

“While we were watching our church being decimated, I noticed that we were beginning to focus primarily inwardly, in a sense out of necessity to pay the bills,” Dieterly said. “But God began to convict me that we needed to look outward. And if we had the faith to look outward, the church ministry would take care of itself.”

Dieterly shared his conviction with the congregation at the weekly Monday evening prayer meeting.

“I told them that I would like us to begin to pray as a church that God would give us a ministry that will be not only outside the church but outside the country, somewhere on the other side of the world,” Dieterly said.

Dieterly has led the congregation through Experiencing God multiple times, and he said they were immediately on board, because they knew that God was already at work around them. They just had to recognize His leading.

The first answer to their prayers came quickly. About two weeks after they began to pray for God’s direction, a young man named Adam showed up at one of their prayer meetings.

Soon after joining the church, Adam told the congregation about a ministry he was supporting in Pakistan, which was headed by a Pakistani Christian named Paul*. After praying, the church felt God leading them to support ministry efforts in Pakistan.

Soon afterward, after surviving multiple attempts on his life, Paul was forced to flee Pakistan and ultimately ended up in the United States staying with Adam.

“So Adam brought Paul to our church and it just so happened that I was getting ready to teach Experiencing God,” Dieterly said.

Paul asked to sit in on the first class and ended up staying for the full 12-week course.

“In about the second week of teaching, Paul came up to me and said, ‘We don’t have anything like this in Pakistan. Is there any way I can get copies of Experiencing God for pastors I know in Pakistan?’”

Dieterly contacted LifeWay Christian Resources and discovered that Experiencing God was not yet available in Urdu. So he got permission for Paul to translate the curriculum and distribute it to pastors in Pakistan.

When the translation was complete, Adam connected Plymouth Baptist Church with a minister in Pakistan named Rafiq and his daughter Sana.

“We photocopied the material and sent it to them to look at,” Dieterly said. “And, within a week, they said, ‘Would you teach it to us? We need this desperately. Our pastors and Sunday school teachers need this. Will you teach it to us so we can turn around and teach it to others?’”

So, in weekly video conferences, Dieterly took Rafiq and Sana through Experiencing God.

“Within a few weeks of us finishing the study, Rafiq contacted me and said he had 22 pastors and Sunday school teachers from six villages who wanted to take the class,” Dieterly said. “But they needed financial help to do it.”

The total cost, after factoring in transportation from each village, food, security services (as being a Christian can be deadly in Pakistan), and other needs, came to a whopping $3,500, a large sum for a church that struggled to tackle its monthly mortgage payments.

“There were some months that, by the time we paid the mortgage and everything else, we had $2 left in checking! That’s how close we’re running,” Dieterly said.

But he and his church felt God tugging at them to support Rafiq’s ministry, and after careful due diligence, they were highly confident that the ministry was trustworthy (something they further confirmed through Adam’s subsequent in-person visits).

To raise the funds, Plymouth Baptist Church held a two-day tent sale in the church’s parking lot. Afterward, they tallied up their earnings. They had made exactly $3,500.

“It’s one of the things Henry [Blackaby] teaches,” Dieterly said. “God reveals through circumstances what He’s doing. We just have to have our eyes open to see it.”

Not long after the initial group of pastors in Pakistan completed the study, the participants spread the lessons they learned to people in their home villages. Within a month, Dieterly received pictures of pastors teaching the material to groups of more than 100 people.

Before long, Rafiq had gathered another group of 20 pastors from various villages who wanted to take Experiencing God. But doing so would require another $3,500.

“I told Rafiq that we’re lucky to have two nickels to rub together when we’re done paying the bills. But if anything hits you when watching the videos of Henry and Richard [Blackaby] teaching Experiencing God, it’s that you pray and wait for God to move. So, we agreed to start praying and wait to see what God did.”

For the next 6 to 8 weeks, nothing happened. But, as Experiencing God teaches, God is at work even if His activity is not immediately evident.

Then one evening while Dieterly was at a movie theater with his wife, he got a call from Plymouth Baptist Church’s senior pastor. The church had received two checks from an individual who was not a member of the church and had no knowledge of their need. Together, the checks totaled exactly $3,500.

“We have a lot of things in our church that we could spend $3,500 on right now,” Dieterly said. “But we took it to the church as a whole, and we unanimously decided that this money was for Pakistan.”

So Rafiq and Sana took the next group of pastors through the study and saw the same results as the first time. The pastors they trained were returning to their villages and spreading what they had learned to others.

“Now the vision is growing a bit,” Dieterly said. “The fastest growing people group in the world that are becoming Christians are Muslims, and Pakistan is, of course, a Muslim country. We have been praying ever since we saw hungry people go through Experiencing God that God would use [the study] to transform Pakistan.”

Recently, Rafiq got in touch with Dieterly again. He has 200 pastors and teachers who want to study Experiencing God. This time, the pastors are not only from villages but from towns and cities as well. But teaching such a large group would come with a much bigger price tag: $100,000.

“Boy, this is a whopper for God!” Dieterly said. “But do the math. If those 200 each teach 100 more as has happened so far, how many people would be trained in as little as six months? Two million.”

Though the church has not yet raised the funds required for the next round of training, Dieterly is confident that the Lord will provide as He has so many times before.

If you would like to support the work Doug Dieterly and Plymouth Baptist Church are doing in Pakistan, contact Doug at 574-286-2018.

*Some names have been changed to protect identities.