This interview originally appeared on entrepreneurialleaders.com which you can view here.

Dr. Richard (Rick) J. Goossen, Chairman, ELO interviewed Dr. Richard Blackaby, President Blackaby Ministries International on December 21, 2018. Dr. Blackaby is the co-author (with his father, Henry) of three books that are particularly relevant to Christian marketplace leaders: Experiencing God: Knowing and Doing the Will of God; God in the Marketplace ; and Spiritual Leadership. Dr. Blackaby will be the keynote speaker at the upcoming ELO Forum in Winnipeg on April 30th (click HERE for information).
This is the second of a series of blog post related to Christian entrepreneurs applying their faith in the marketplace based on the interview with Dr. Blackaby.

RG:      What are some biblical principles that might be particularly relevant to Christian entrepreneurs?

There are two others I’d mention.  One is the whole principle of the mustard seed.  Jesus said the Kingdom of God is like the mustard seed.  It is one of the smallest things you’ll find in nature but yet it has the potential to become enormous.  So much of what God does starts off seemingly small and insignificant.  The biggest work God ever did began with a baby.  Something is not insignificant if God is a part of it! There are a lot of things the world thinks are small, worthless, and powerless, but in God’s hands suddenly those very same things, like a baby, are mustard seeds, and they have enormous potential.

I think the exciting thing about the Christian life is that you may be handling things that the world says are small but, when surrendered to God, suddenly they have enormous potential.  For a Christian to tap into what God knows has enormous potential is a very exciting thing.  Perhaps coupled with that is the principle you find throughout the Bible that teaches that if you’re faithful in a little, God will give you more.  A lot of people are striving for the “more,” but they haven’t proven faithful yet in the “little.”  Sometimes as entrepreneurs we’re thinking of the large return, but God trusts the big things to those who have proven faithful in the small things.

I tell people all the time, if you want to be in a place one day where God’s entrusting big things to you, then begin by taking an inventory of all the small things in your trust.  If you’re not handling your marriage well, how is God going to give you 1,000 employees?  If you’re not treating your kids well as they enter their teenage years, why would God lead you to start a second factory and greatly expand your workforce?  Faithfully handle what you’ve got already and then God will keep entrusting more to you.

RB:       We are created in the image of God.  He is the ultimate creator.  He can create things out of nothing and we’re created in His image.  Even after thousands of years of theologians wrestling with it, they still don’t fully grasp the magnitude of what it means to be created in the image of God.  He creates things to bring glory to Him and He delights when we do. In that sense, we are never more like our Creator than when we are creating something ourselves.

I think God instilled creativity into the fabric of human nature. So every time you create something, you are reflecting God’s image. It brings Him glory. I think it brings Him pleasure.  There’s a sense in which God didn’t finish creating everything in the world on the Sixth Day. He didn’t create houses, highways, infrastructure for cities.  He created the Garden. He created the universe. He did lots of foundational things, but He’s left a lot of things for us to follow up on and create ourselves.

I think that’s a wonderful calling.  In many ways, you’re very much like your creator when you go about your calling to create – whether it’s a new company, a new cure, or a new product that’s going to alleviate suffering for people worldwide. There are so many things left still to be created.

I think that’s an incredible divine invitation to people to say, “Be like Me.” Whatever God created was good.  It was good for people.  I think that’s a wonderful invitation for humanity and for Christians, particularly, to say, “God help me, inspire me, to create things that will be good for the world and bring glory to you at the same time.” 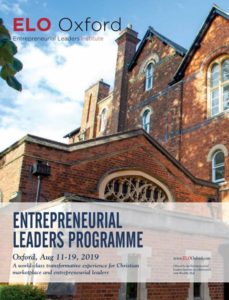