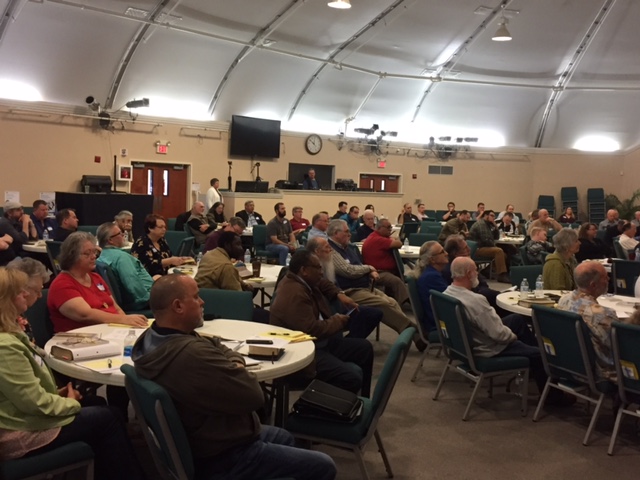 The one-day event, which included presentations by Richard Blackaby, president of Blackaby Ministries International, and Mark Clifton, Senior Director of Church Replanting at the North American Mission Board (NAMB), was designed to offer encouragement to struggling churches. Keynote messages drew on material from the book Flickering Lamps, which Richard Blackaby co-authored with his father, Henry Blackaby.

“Parts of the area I serve have a large number of churches that are plateaued, declining, and dying,” said Howard Burkhart, the California-based Church Planting Catalyst for NAMB who spearheaded the event. “The Sacramento and Stockton areas have traditionally been churched areas. But many of those churches were started 40 years ago. Over the years, they have slowly declined to the point that some are no longer viable and more are in trouble.”

Burkhart estimates that as many as one-third of the churches in the California region he serves are struggling.

“A lot of the churches have reached the end of their lifecycle, and they have not started a new one,” Burkhart said. “Some churches may be able to turn it around, but for others, drastic change is necessary.”

Burkhart said he would have been thrilled to draw 50 attendees to the REVIVE conference. The event ended up attracting upward of 100 ministry leaders representing more than 50 California churches.

“The attendance was far larger than what I’d hoped for,” Burkhart said. “That tells me that the need was huge, and people saw that need for themselves.”

In the months following the REVIVE conference, Burkhart has seen radical changes take place in many of the churches that sent representatives to the event.

“There were four or five churches there that had already talked to me about needing help,” Burkhart said. “Since the conference, every one of them has replanted or undergone the revitalization process.”

Burkhart credits the REVIVE conference with starting a much-needed conversation about the need for revitalization in California churches.

“I think the book Flickering Lamps was helpful,” Burkhart said. “But I think the biggest thing was that the conference acknowledged that this is an issue and sweeping it under the rug and pretending it doesn’t exist is not helpful.”

Many of the attendees left the REVIVE conference encouraged that there is hope for their church.

“[Attendees] saw that if Richard Blackaby and NAMB believe [revitalization] can happen, there must be something to that,” Burkhart said. “I think that really resonated with people. It was a perfect blend of spiritual issues and the pragmatic steps churches can take to move forward.”

Burkhart said he hopes the momentum from the event will continue to have a wide-reaching impact in California and the surrounding states.

“Now we are working with additional churches that were not a part of the REVIVE conference,”  Burkhart said. “They weren’t a part of the original group, but they have seen what is happening, and it’s spreading. There’s probably another 30 or 40 revitalizations and replants that will happen in the next five or six years. Ultimately, I’m working toward this area becoming a replanting and revitalization hub for the West Coast.”

Burkhart said the REVIVE conference with Blackaby and Clifton was a catalyst that helped spark the movement.

“We would not be where we are were it not for the REVIVE conference,” Burkhart said. “This conference was a game-changer, and I don’t use that term very often.”

If you are interested in hosting a REVIVE conference in your area, contact Rick Fisher at rfisher@stevep134.sg-host.com.