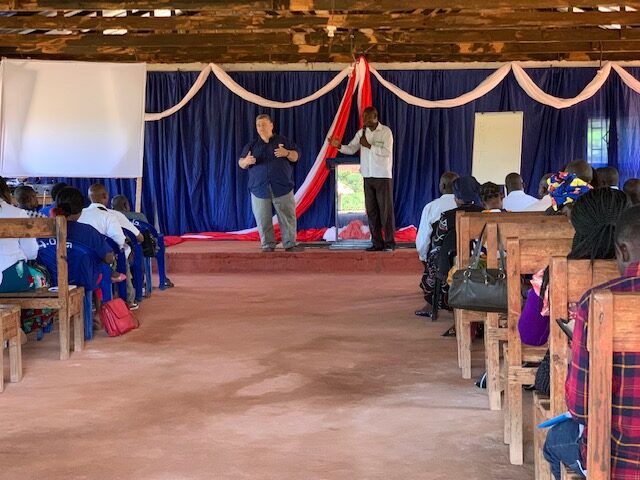 An explosion sounded and then bullets started whizzing through the air as 10 armed members of Boko Haram entered the small church in northern Nigeria where Bob Payne was preaching. People had told him he was crazy for ministering in such a notoriously dangerous region. But Payne said that when God tells him to do something, he doesn’t argue.

“My responsibility is to say, ‘Yes, Lord,’ and go,” Payne said. “I don’t worry about it. I know He knows a lot better than I do, and I can trust Him. I learned that through Experiencing God.”

As the bullets continued to fly through the air, his driver grabbed him and physically led him out of the building where they jumped on a motorcycle and headed to another village.

On their way Payne lost his small backpack, which contained the only belongings he’d brought with him on that leg of the trip, including one of his most treasured possessions: his preaching Bible. So, despite his driver’s protests, they retraced their path through the Nigerian desert.

“I recovered the Bible, and I carry it everywhere I go,” Payne said. “It’s in a plastic cover, and it’s literally filled with the sand of persecution. I never want to forget that moment and the people all over the world today dying for the Lord Jesus Christ.”

Payne has had several dangerous encounters while traveling the world preaching and teaching Experiencing God, a study that shifted the trajectory of his own life when his wife pressured him into taking it at their church in the 90s.

“I had never heard that faith was about a love relationship with the Lord,” Payne said. “But Experiencing God told me that He was always pursuing me in a love relationship. He had been speaking to me, but I just hadn’t been listening.”

One of the things God was telling him to do was quit his corporate career and enter full-time ministry. So he did. He has since taught Experiencing God hundreds of times in the United States and around the world, including in a number of Muslim nations in the Middle East.

Payne’s is just one story of how God has used Experiencing God to change someone’s life. Since its release in 1990, more than 8 million copies of Experiencing God have been sold in the United States, and it has been translated into roughly 60 languages, including Korean, Arabic, Japanese, Hindi, and Russian. Hundreds of thousands of groups have studied the material, and countless people have experienced spiritual transformation as a result.

“I’ve been fortunate enough to go to places like China, Brazil, and South Africa, and people always tell me their testimony of how Experiencing God changed their life,” said Richard Blackaby, Henry Blackaby’s oldest son and president of Blackaby Ministries International.
Though 30 years have passed since Experiencing God’s initial release and Henry Blackaby has since retired, the BMI team believes God has called them to continue spreading the Experiencing God message for many years to come.

“With so much information available to us today, it is imperative that we offer a clear message about what is true and eternal in the midst of half-truths and relativism,” Rick Fisher, vice president of BMI, said. “Experiencing God walks believers through a spiritual progression that allows them to have a fresh, personal encounter with Him as He shapes their heart to match His.”

The BMI team is excited to see that God is using the life-changing material to impact the next generations.

“Like so many others, the idea of watching to see where God is at work and joining Him completely rocked my world,” said Mike Blackaby, Henry Blackaby’s oldest grandson and a church planter on Vancouver Island. “The relevance of that concept is perhaps more revolutionary today than it was in the 90s. It’s not up to me to plot the course and ask God to empower it. It’s my job to feel where the wind is blowing and to raise my sail.”

Bob Payne recently returned from teaching Experiencing God in the Middle East. It was his ninth visit to that area, and he said he sees God use the material in new ways every time.

“Over and over and over, God reveals Himself in unique ways,” Payne said. “Preaching without air conditioning or fans in the Middle East for 17 days is exhausting, but it’s so cool. You just never know what’s going to happen out of an Experiencing God study.”