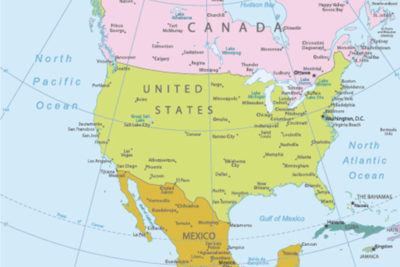 I have been a dual citizen all my life. I was born in California to an American mother; hence, I have always been American. But I was mostly reared in Canada and have a Canadian father; therefore, I have always been Canadian. I have been told that people used to have to renounce one of their citizenships when they turned 18, but I never did. I still carry two passports. Being a dual citizen has given me a unique perspective on America. I love America and am loyal to it. But I have lived in another nation as well, so I view America both as an insider and an outsider. Canada and the United States both have strengths and weaknesses. I am not blind to either.

American Christians often forget that they are also dual citizens. We may be citizens of the United States, but, and this is crucial, we are primarily citizens of God’s kingdom. This concept is hard for some Americans to understand. The United States is one of the most patriotic nations on earth. It honors its flag and its veterans. It boasts a plethora of patriotic hymns and songs. Monuments, holidays, and cemeteries honor the past. There is absolutely nothing wrong with patriotism. Unless, of course, your love of country leads you to become disloyal to God’s kingdom. Jesus instructed people to seek firstthe kingdom of God (Matt. 6:33).

To make matters more complex, America is divided politically into two highly divergent and antagonistic camps. Declaring that the United States is polarized is a gross understatement! If the Republicans say the temperature outside is hot, Democrats will assert that they find it chilly. If Democrats announce that it is Wednesday, Republicans will adamantly argue that it is Thursday. Aligning with one group means opposing the another.

Recently, the news has fixated on an immigration issue that involves separating children from parents who attempt to enter the United States illegally. Democrats have portrayed the government as heartless and cruel for taking a hard stand on illegal immigrants. Republicans view Democrats as desiring open borders so potentially thousands of new Democratic voters can pour into America. Both Republicans and Democrats often seem more concerned about political victories than helping people.

But here is a radical thought. What would Jesus do? My hunch is that He would not immerse Himself in politics. His primary concern would be for God’s kingdom. Jesus, more than anyone else, would know that the saints will not be clustered into national groups in heaven. American Christians will not congregate in one place while Chinese Christians group in another. No one in heaven will ask, “What nationality were you?” We will all belong to one kingdom: God’s.

Here is a troubling Scripture passage:

“But who can endure the day of His coming? And who can stand when He appears? For He is like a refiner’s fire and like launderer’s soap. He will sit as a refiner and a purifier of silver; He will purify the sons of Levi, and purge them as gold and silver, that they may offer to the Lord and offering of righteousness. Then the offering of Judah and Jerusalem will be pleasant to the Lord. As in the days of old, as in former years. And I will come near you for judgment; I will be a sift witness against sorcerers, against adulterers, against perjurers, against those who exploit wage earners and widows and orphans, and against those who turn away an alien—Because they do not fear Me” says the Lord of hosts. “For I am the Lord, I do not change: Therefore you are not consumed.” (Malachi 3:2-5)

What does this verse mean? God clearly cares for vulnerable people, and He expects His people to care for them too. Christian organizations have built more orphanages, hospitals, and food kitchens for the homeless than any other religious group has. Oppressed people are treated better in Christian-oriented nations than elsewhere. One cannot have God’s heart and remain apathetic toward oppressed people.

Unfortunately, politics has seized many Christians’ hearts and minds today, and believers often consider their political allegiance before viewing matters from the perspective of God’s kingdom. What does God mean when He instructs people not to turn away the alien? I don’t think He is referring to illegal immigrants.

Due to the constant warfare and famine in the ancient world, people were often displaced. Without government assistance, people without money and power were vulnerable to numerous societal dangers. Immigrating to Israel was legal. In that culture, however, social networks were key. Without family and friends, people were defenseless. Though people might not have been cruel to these aliens, they did little to help them either. Immigrants were considered foreigners. Interlopers. Responsible for themselves. But God didn’t see the situation that way. He declared that He would hold His people accountable for how they treated the weak and displaced. God condemned His people for turning a blind eye to those who were suffering in their land.

The other day, I made a statement about caring for people, even illegal immigrants, with the love of God. A Christian became angry and accused me of wanting to fling open our national borders and let everyone in. Sadly, our nation is so polarized that loving the downtrodden is considered un-American. But it is possible to be compassionate toward people while maintaining law and order. Caring for people does not necessarily mean the USA should abolish its immigration laws. But it does not reflect the heart of Jesus when Christians view pictures of immigrants being herded into walled camps while awaiting deportation and angrily mutter, “They should all go back where they came from!”

Scripture says this of Jesus: “But when He saw the multitudes, He was moved with compassion for them, because they were weary and scattered, like sheep having no shepherd” (Matt. 9:36). Jesus never simply saw a crowd. He always saw people. Individuals. He knew each one had a story. There are certainly criminals and drug dealers who are attempting to exploit the system and enter America with evil intent. But many other people are fleeing poverty, violence, and crime. Many people attempting to enter the nation long to live and work in a land that is prosperous like America. Many are parents who hope their children and grandchildren can enjoy a life that is free and safe. I suspect that if we took time to hear more of their stories, we might not be as hard-hearted in our attitude toward them.

It is not either-or. We do not have to choose between upholding laws and having compassion. We can do both.

Should we abolish immigration laws and let everyone in without vetting them? No. Should we view these people as Jesus does? Yes. We are Christians first and Americans second. Even if border guards must turn people away, they should treat them with dignity and compassion. Perhaps instead of angrily denouncing government officials, Christians could find ways to minister to those who are being detained at the border. Perhaps churches could sponsor immigrant families. Churches might even minister to the government employees tasked with the thankless job of protecting the nation’s borders. Our first response should not be to blindly embrace the Democrat or Republican position on the situation. We should ask ourselves what Jesus would do. We must remember that, regardless of whether we support our current president, our first loyalty is to our King. We are dual citizens. We live to build His kingdom and to reflect Him well to a watching world.

Be careful that in the polarized, angry and uncompromising society in which we live, you do not lose your love and concern for the people for whom Jesus died.